Opening the Door to the World

A New Contender
Announcement of re-entry to the World Rally Championship.
Establishment of Hyundai Motorsport in Germany. 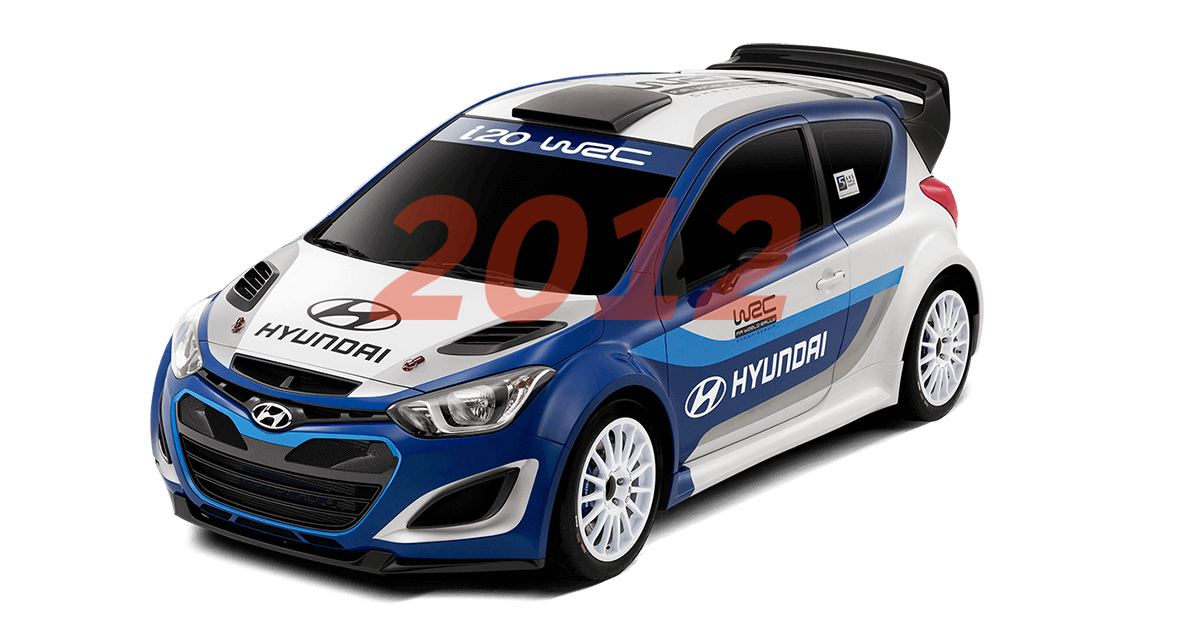 Hyundai announced its re-entry to the WRC and unveiled the New i20 WRC concept car at the Paris Motor Show in September, 2012. And just three months after this announcement, Hyundai Motorsport was established in Alzenau, Germany, propelling Hyundai’s preparation for re-entry to the WRC.

Unveiling of the Newly Improved i20 WRC Concept Car Model at the Geneva Motor Show, March 2013.
Establishment of the European Technical Center in Nürburgring.
Debut Presentation of the N Logo and Unveiling of the 2014 WRC Participating Vehicle, December 2013.

Just twelve months after its establishment, the WRC team arrived in Monte-Carlo for its competitive debut with two i20 WRC rally cars.Later on at Rally Germany, Thierry and Nicolas went on to claim Hyundai Motor’s first WRC victory, in spite of an earlier accident that required mechanics to completely rebuild the car.

A Glimpse Into the Future

Launch of High-performance Racing Concepts RM 16 at the Busan Motor Show and RN 30 at the Paris Motor Show.
Successful Completion of the 2016 24 Hours Nürburgring Endurance Race with i30 N Prototype.

Hyundai Motor not only took part in the 2016 24 Hours Nürburgring Endurance Race in Germany, but successfully ran both of its vehicles the full length of the grueling 24-hour course, which many other cars never even complete.A newly developed High-performance N engine showed its ability to perform under harsh conditions, and the public’s first look at the performance of i30 N's powertrain generated a whirlwind of anticipation among drivers around the world.

Launch of i30 N, Hyundai’s First High-Performance Car.
Ramp Up Customer Racing Activities with the Debut of i30 N TCR Which Won its First Race Ever.

The first i30 N model was launched in Europe and collected numerous accolades from renowned media in Europe, in addition to a great amount of interest from consumers. Autocar, one of the most influential automotive publications, awarded i30 N in their annual awards as a ‘Game Changer’. Consecutively, Hyundai expanded its customer racing business to TCR, and the i30 N TCR won its first race ever at the Zhejiang international circuit in China. Thus, demonstrating the excellent performance of N vehicles.

Establishment of the High-Performance Vehicle & Motorsport Division, to Oversee Strategy, Product Planning, Sales and Marketing.
Consecutive Launch of Veloster N and i30 Fastback N Car Models.
Leading the 2018 WTCR Series with Top Performance by i30 N TCR Drivers and Team in First Place.

Thomas Schemera was appointed as the new Executive Vice President to lead the newly established High-Performance Vehicle & Motorsport Division.The Veloster N, Korea’s first N model, has been a sensation among customers, leading to strong sales growth. As such, Veloster N has also been voted the ‘Best Buy’ car in the Kelley Blue Book ‘Performance Car’ division, raising expectations for the US market.The i30 N TCR displayed its powerful performance and rocked the 2018 FIA World Touring Car as the overall winner with Gabriele Tarquini leading the team. The i30 N TCR also took 2nd and 4th place in the 24-Hour Nürburgring race in 2018.